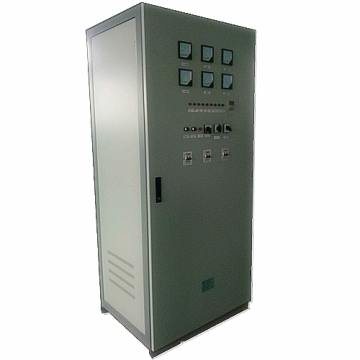 - Over voltage / Under voltage


Float Charge
Nickel Cadmium Battery – 1.30V per cell
This will enable the battery to recover its capacity quickly and reduce the water consumption. In this aspect, it will reduce the topping up frequency and storage of water.

Optional Items
Discharge tester and monitoring alarms can be added to the charger control board with no modification required.

The bridge is the heart of the power circuit. This assembly is a standard full wave silicon bridge, which is therefore capable of being made conductive for any part of each cycle. This is accomplished by the application of pulse to the gate of the terminal of the SCR at the desired time. Before the pulse is applied, the SCR is open, and no current flows in the circuit. However, as soon as the SCR is fired, it operates as a standard silicon rectifier until the forward current is reduced to almost zero. Charger output control can therefore be accomplished by changing the point in time the SCR are fired.

As load increases, the conduction angle will decrease until the SCR is at full conduction. When the full load rating of the charger is exceeded, the firing angle is increased to the partial Conduction State. The control module plug in card accomplishes control of the SCR firing.

Following the bridge is a snubber circuit, consisting of a resistor and Capacitor. This acts to suppress DC line surges and thereby protect the bridge output. This acts to insure proper operation of the SCR and allows for full conduction when required.

Resistor Voltage Sensing Network
A resistor divider network senses the battery voltage. The programmed resistor matches the card to the particular charger and the value of this resistor is selected according to the charger`s nominal output voltage.
The output of the voltage-sensing network is fed to an integrated circuit, which generates an error signal.
This error signal is used to vary the firing angle.

AC Power
The printed circuit control module derives its power from a separate secondary transformer winding. This voltage is rectified by means of SCR, and provides the control circuit with DC power source.

Slow Start Circuit
When the charger is switch on with a completely discharge battery on the output, or short circuit, heavy current pulses can occur when the control circuit attempts to regulate the charger to full output. These current pulses can destroy the semiconductors in the bridge rectifier. To prevent this, the control circuit is equipped with a slow start circuit.

This device consists of a capacitor that is rapidly discharged when the AC supply main voltage drops to zero. When the AC voltage returns, the capacitor is charged relatively slowly. The voltage across the capacitor affects the firing angle (α), so that the charger`s output increases slowly during the first 1–2 seconds of operation.

Synchronizing Circuit
In order to deliver the firing pulses to the SCR at the appropriate time for each cycle, it is necessary to synchronize the phase shift modulator to the incoming AC line. The synchronizing circuit accomplishes this.

We has a complete production quality management system, and passed the ISO9001 (2000 version) quality management system, CE and military secret certification (level III) certification. Some products have entered the international market through international third-party certification such as PSB. Our company has actively involved in the development and production of the auxiliary projects of National key projects. Our company is one of the firms participated in the development and commissioning of Jiaolong manned submersible.

If you are interested in any of our products or would like to discuss a custom order, please feel free to contact us. We are looking forward to forming successful business relationships with our clients around the world in the near future.

Email to this supplier